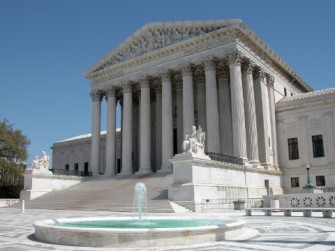 On November 17, 2016, Washington Legal Foundation petitioned the US Supreme Court to review a US Court of Appeals for the Ninth Circuit decision, Gordon v. Consumer Financial Protection Bureau. CFPB had pursued a substantial fine against WLF’s client, Chance Gordon, in June 2013, a time during which the Bureau lacked a properly appointed Director. Mr. Gordon’s petition argues that the attempted corrective action Richard Cordray took once he lawfully became CFPB Director—a blanket, retroactive ratification of all actions taken during his unconstitutional recess appointment—runs afoul of the US Constitution’s Appointments Clause (contained in Article II). Mr. Gordon also argues that because Mr. Cordray had not been properly appointed, CFPB lacked standing to pursue a claim against him in federal court.

This week, three organizations filed amicus curiae briefs with the Supreme Court in support of Mr. Gordon’s writ of certiorari. The briefs positively reinforce WLF’s two major justifications for the Court’s review of Gordon v. CFPB. The petition first argues that the Ninth Circuit’s acceptance of Director Cordray’s blanket ratification severely undermines a fundamental check on Executive power: the requirement that Congress must first approve presidential nominees before they can be lawfully appointed. The Gordon decision is also contrary to Supreme Court precedent and furthers a split in the circuit courts over when ratification of ultra vires administrative action is permissible.

It is uncontested that, because the Senate was not in recess on January 4, 2012 when President Obama recess-appointed Cordray as CFPB Director, Cordray was not an “Officer of the US” when the agency took action against Mr. Gordon. The Supreme Court held in 1873 in Cook v. Tullis, and again in 1994 in FEC v. NRA Victory Committee, that past ultra vires acts of government officials can only be ratified if the ratifying official had the authority to take the ratified action at the time it was taken, as well as the legal authority to act at the time of ratification. The cert petition argues that Director Cordray did not have the authority to take action against Gordon when CFPB originated its enforcement action all the way through to when the US District Court entered judgment against him.

The amicus brief filed by the Cato Institute strongly supports that argument. It rebuts the Ninth Circuit’s conclusion that CFPB’s suit against Mr. Gordon was lawfully brought because the agency itself had the authority to act. When the Dodd-Frank Act created CFPB, and gave it the authority to “commence a civil action,” Cato notes that:

[I]t did not vest enforcement powers upon inception in the agency qua agency, or enable the exercise of any such powers by the director before he or she was validly appointed.

The law only granted the Secretary of the Treasury specific, limited authority to act prior to the installment of a CFPB director, and that authority, Cato explains, did not include the type of action taken against Mr. Gordon.

The Ninth Circuit reasoned that it was not bound by NRA Victory Committee because when evaluating the common-law concepts of agency in that decision, the Supreme Court applied an older version of the Restatement of Agency. The Ninth Circuit instead applied the newer Restatement (Third) of Agency. As an amicus brief filed by Chapman University’s Center for Constitutional Jurisprudence (CCJ) points out, however, the court misapplied the Restatement’s principles. The court stated that a principal (Cordray) who lacked capacity at the time the agent (CFPB) acted could ratify the act once the principal regained capacity. The Restatement, however, refers to a lack of mental capacity or disability due to age, not legal capacity. And it was legal capacity, CCJ explains, that Cordray lacked in suing Gordon. Cato also notes in its brief that a principal cannot ratify its agent’s unlawful conduct. CFPB’s actions without a properly appointed director were contrary to the Dodd-Frank Act.

The appeals court’s creation of a new theory of ratification “converted the Appointments Clause into an exercise of mere protocol and etiquette,” the CCJ brief states, and creates a “no harm, no foul exception to Article II” as Cato’s brief argues. Such disdain for the separation of powers is especially troubling when one considers the breadth of CFPB’s power and its structure. CFPB, Cato’s brief explains, enforces 19 federal laws. During the 18-month period of Director Cordray’s unconstitutional recess appointment, the agency filed “16 enforcement actions, resulting in over $500 million in monetary relief.” The Dodd-Frank Act vested all of CFPB’s power in a single director, who can only be removed by the president for cause. Congress does not appropriate funds for the agency’s budget. This unchecked authority, an amicus brief filed by the US Chamber of Commerce in Gordon argues, will increase the incidences of frivolous or abusive CFPB enforcement actions.

Cato’s brief also fortifies WLF’s argument in the Gordon petition that Director Cordray not only improperly ratified CFPB’s ultra vires conduct, but he also improperly ratified a federal district court’s actions against Mr. Gordon, including a restraining order and a preliminary injunction. In approving this conduct, Cato argued, “the Ninth Circuit stretched the ratification doctrine to its constitutional breaking point.”

Court actions filed to vindicate the public’s interest in law enforcement can only be brought by “Officers of the United States” within the meaning of Article II. Other circuit courts and the Supreme Court, the Chamber’s brief explains, have held that merely asserting an injury to that interest, without having it advanced by an Officer of the US, does not create Article III standing. Contrary to the Ninth Circuit’s conclusion, the Chamber argues, Executive Branch agencies cannot take legal action without a properly appointed Executive Officer: “Just hanging an ‘Executive Branch’ label on the agency, as the panel majority did, does not change that fact.”

The government is expected to file its response to Mr. Gordon’s cert petition by January 23, 2017.